Day of the death in Oaxaca: a cultural treasure

Oaxaca, Cultural Heritage of the Humanity, is a state with a vast gastronomic diversity, touristic attractions, indigenous languages and traditions that delight locals and strangers.

The traditions in Oaxaca are the result of the mixture of indigenous ancestral customs and the new practices that the Spanish brought with them. One of them, and without doubt, the most significant, is the day of the dead, which is part of Mexican folklore, however, it is in Oaxaca where it is lived in a unique way. 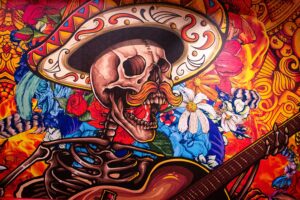 So, let’s talk about what this emblematic tradition consists of. This is celebrated on the first and second of November, where according to the belief of the original peoples, the souls of those who are no longer on the earthly plane with us return to visit us. Through the years, and with the influence of the Spanish, this tradition was modified until what we know today with the assembly of the traditional altar of the dead, where fruits such as tangerines, jícamas, peanuts and cane are placed. Food such as the exquisite mole, hot chocolate and the traditional bread of the dead, in turn, the altar is adorned with the beautiful cempasúchil flower with yellow-orange petals with an enchanting scent. Its purpose is that when the souls of our deceased come, they can taste everything that has been put in it, for this reason their favorite foods that they enjoyed in life, a glass of mezcal, are also placed, all this accompanied by their photos. 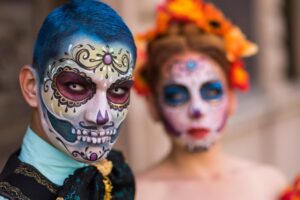 It is also customary that on these dates people go to the cemetery to visit their graves to bring them flowers and candles, which will be their guide on their return. Last but not least, in this celebration the “comparsas” also take place, which are a kind of parade of people dancing and wearing different costumes alluding to the date.

This, with other cultural activities promoted in the state, is what is experienced in this beautiful tradition, considered a party in the memory of our deceased where they are remembered with nostalgia, but also with joy.

Traditions, gastronomy, touristic places, architecture, and much more is what Oaxaca offers the world, which is why it has become one of the best places to live, positioning itself as one of the most important states to invest in real estate.

Kinds of properties in Oaxaca | SILMEXICO